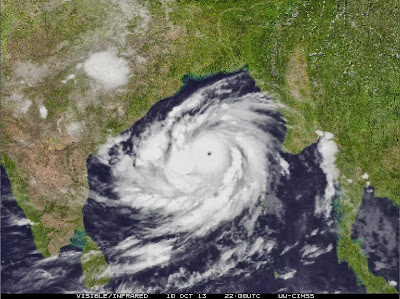 (This is based on my Kannada blog written last year)

Now, we have killer Cyclone 'Phailin' in India.
This super storm is almost half size of India & has been marked as Level-5(highest - most dangerous) Cyclone. It is set to pound India, with estimated wind speeds of around 220 km an hour.

Approximately 260,000 people living in coastal areas of Andhra Pradesh & Odisha have been asked to vacate. While we all pray for the safety of every one, one might wonder who names these Cyclones.

Last year, India saw 'Neelam'. Earlier this year, we had 'Mahasen'. And now, dangerous 'Phailin'!
Few years back, we had seen 'Katrina'. If you are curious about these names, read further...

While Sandy hit America, naturally my mother was worried about me.
In telephonic conversation, I consoled her - "Don't worry! We are very far from East Coast. We are not affected from Sandy."
At the same time, "Neelam" was about to hit Indian coasts. Mom said, "Sandy in US...here 'Neelam' is coming...All Cylones are coming with names attached, these days!". I teased her, "How can Cyclone come with names? We humans, name these Cyclones...Remember we had 'Laila' few years back?".
She did not remember 'Laila'. She asked me innocently, "Is it? If 'Laila' had come, will 'Majnoo' come too?". We ended that, conversation with hearty laughs, but little did I know that, 'Majnoo' was not going to come!

While 'Sandy' continued to create ruckus in USA, twitteratis & Facebookies created major war between Men & Women by asking "Is 'Sandy' - 'Sandeep' or 'Sandhya'?".
Husband, who argued that, 'Sandy' is indeed 'Sandhya' and NOT 'Sandeep', ended up cooking for weeks!
This was another story, which went around facebook world...


While Americans were worried about the damage created by Hurricane Sandy, my wife was very agitated. She said to me, "This is utter cheating! Why all hurricanes need to be named after girls! Earlier it was 'Katrina', now 'Sandy', this is ridiculous!".
Upon hearing this, I could not control my inner joy! I blurted out, "Aah...this is so obvious!!! Why should you even get agitated about this!".
I knew major damage was already done with my statement, but unfortunately, I could not hide my smile either. Married men can imagine my plight now!
Despite all this & cold-war with my wife, which went on for good long time, I was very very happy that, she had accepted that, 'Sandy' as a girl!

By this time, all girls who are reading this blog, might be getting ready to start third world war.
So, I have to say something very important.

Not all Hurricanes are girls. In future, you will see, 'Aakash', 'Tony' & 'Saagar', but 'Majnoo' very unlikely!
Are you wondering, how can I say that, so confidently? There is a logic behind it.
There is a list of names for Cyclone, similar to our Hindu system of naming each year with 'Prabhava'/'Vibhava' etc.

Now, you might ask me, "If there was any such list, then why we never heard about these names, when we were kids.
Most of us know about 'Prabhava-Vibhava' since elders thoughts us at home. Why didn't they teach us about this list then?"
There is reason for that too!

Cyclone naming system was started very recently, in 2004. Based on this list, first Cyclone to hit India was 'Onil', then came 'Agni'.
BUT, you might not have heard them, unless they are major Cyclones. Many many cyclones occur every year, not every one gets highlighted in media.
Very few like 'Laila', 'Katrina', 'Irene' might last in our memories for good amount of time due to the disasters!

Entire Earth have been divided into various zones. Each zone contain separate list of names.
Based on this, 'Katrina' or 'Sandy' can only 'entertain' countries adjacent to Atlantic Ocean. 'Neelam' can dance only in Indian Ocean.
Process of naming Cyclones & Hurricanes, started accidentally when famous ship named 'Antje', sank in Atlantic Ocean due to Hurricane.
People started started referring that particular hurricane, as 'Antje' Hurricane.

In mid-20th century, people started naming each & every Hurricane. Interestingly initial list contained only girls names! This method changed in 1979 and Boys names were included in the list. Probably, cyclonic storms at home might have forced weather dept employees to change the list. Now, for each hurricanes born in North Atlantic Ocean, boys and girl's names alternate.

Earth has been divided into following zones:

List of names for North Indian Ocean is here: 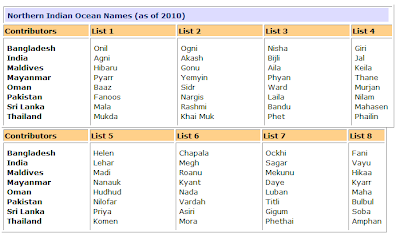 Though Indian Meteorogical Department allows public to suggest new names, it is unlikely to modify the list prepared in 2004 in near future. Hence, we might have seen 'Laila' but we are unlikely to see 'Majnoo'.

If you are not still not satisfied with my explanation, you may visit this link:
http://www.wmo.int/pages/prog/www/tcp/Storm-naming.html

This is the secret behind naming of Cyclones!

Finally coming back to curious case of 'Sandy's gender. It is indeed girl or 'Sandhya' because previous Hurricane was 'Rafael' and the one which followed was 'Tony'!

2. 'Cyclone' and 'Hurricane' are one and the same. Different naming conventions are used in different parts of the world.